By far the majority of Wood Boring Beetle infestations we inspect and treat relate to two main species of Beetle, the Common Furniture Beetle (or Woodworm) and the Death Watch Beetle.

Woodworm Biology Description: Woodworm eggs are barely visible to the naked eye, whitish in colour and lemon shaped. Woodworm larvae are creamy white, curved, soft skinned, fleshy and covered with short yellowish hairs. Woodworm larvae are around 7mm long when fully grown and live within timber, feeding and increasing in size as they bore. Larvae bore for around 3 – 5 years, creating characteristic bore dust, before reaching their maximum size and forming a pupal chamber near the surface of the timber. 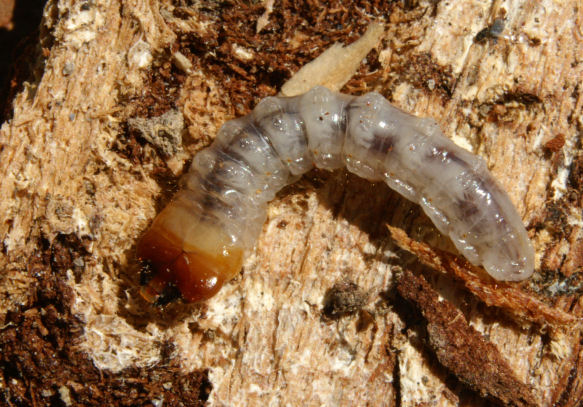 Woodworm Larvae
When metamorphosis is complete, the adult Woodworm Beetle (3-5 mm long and reddish brown in colour) bites through the thin veneer of surface timber to emerge through a flight hole. Emergence generally takes place between late March to August. Bore dust dislodged from galleries within the timber is very distinctive; it is cream coloured, lemon shaped and gritty when rubbed between fingers.

The adult is often confused with the Biscuit Beetle. Woodworm Beetles live for only 3 to 4 weeks after emergence.

The Woodworm adults mate resulting in the female laying eggs in the cracks and crevices of timber perpetuating the Woodworm Life Cycle. 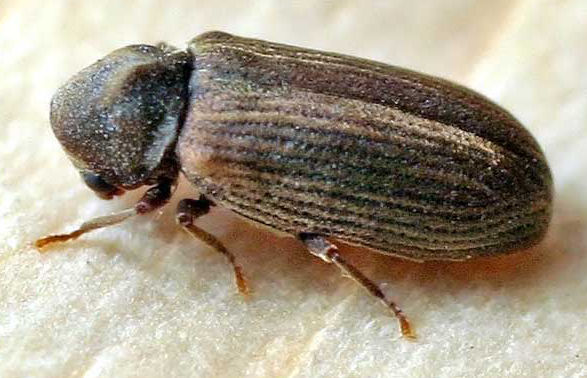 Habitat: Woodworm (Anobium punctatum) habituates in Softwood and European hardwoods. Woodworm only infests sapwood of timber unless wood rotting fungi is also present, in which case it may also infest heartwood. This particular Woodworm is frequently found in older furniture and building timbers where some Damp Timber may also be present such as in poorly ventilated sub floor timbers and other timbers in contact with or adjacent to damp masonry. Woodworm is also frequently found in timbers around loft access, under stairs, cupboards and around WC’s. 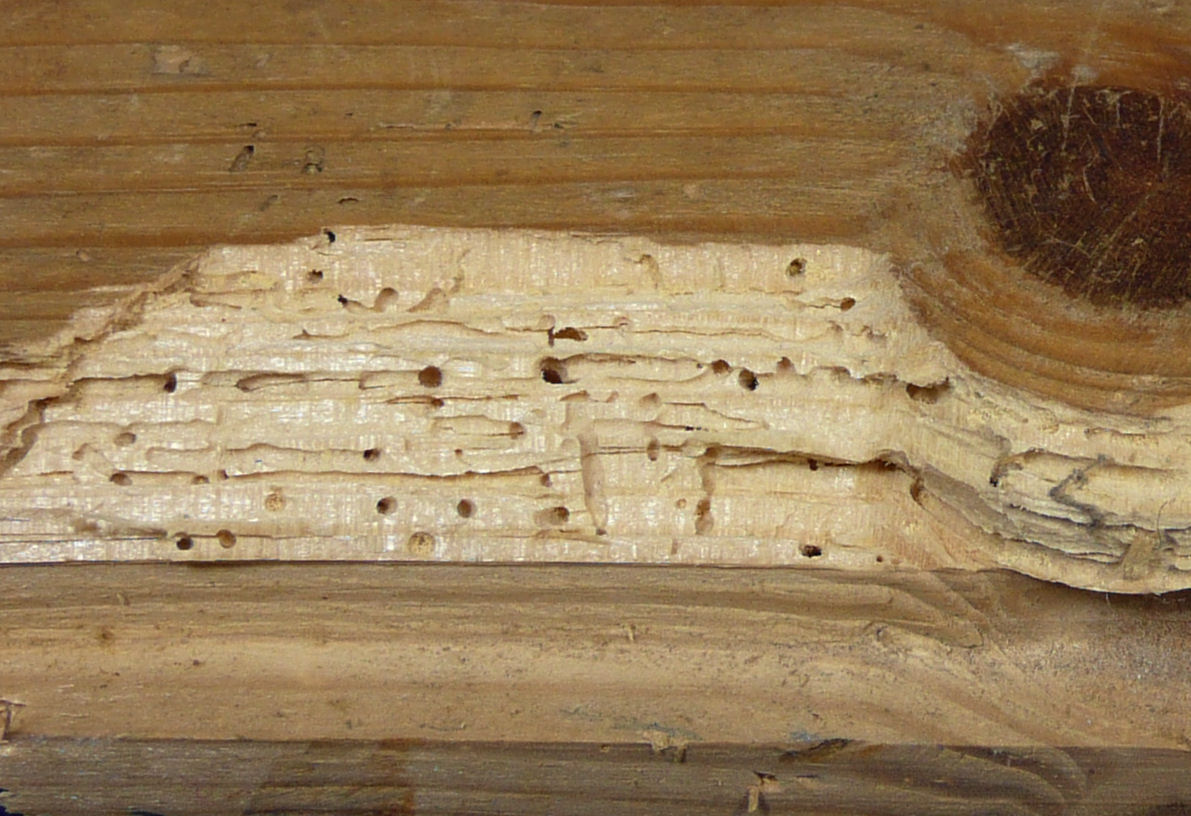 Description: Death Watch Beetle eggs are white and lemon shaped, visible with the naked eye. The eggs are laid by the female in cracks, crevices and flight holes. Females lay anywhere between forty to sixty eggs and on occasions up to two hundred. The eggs hatch in two to eight weeks.

The adult Death Watch Beetle is chocolate brown in colour and up to 9mm long with patches of yellow hair. The adults emerge from March to June to mate when tapping sounds made by the beetles knocking their heads against timber surfaces can be heard.

The normal life cycle of the Death Watch Beetle is four to five years but can be up to 10 to 12 years. 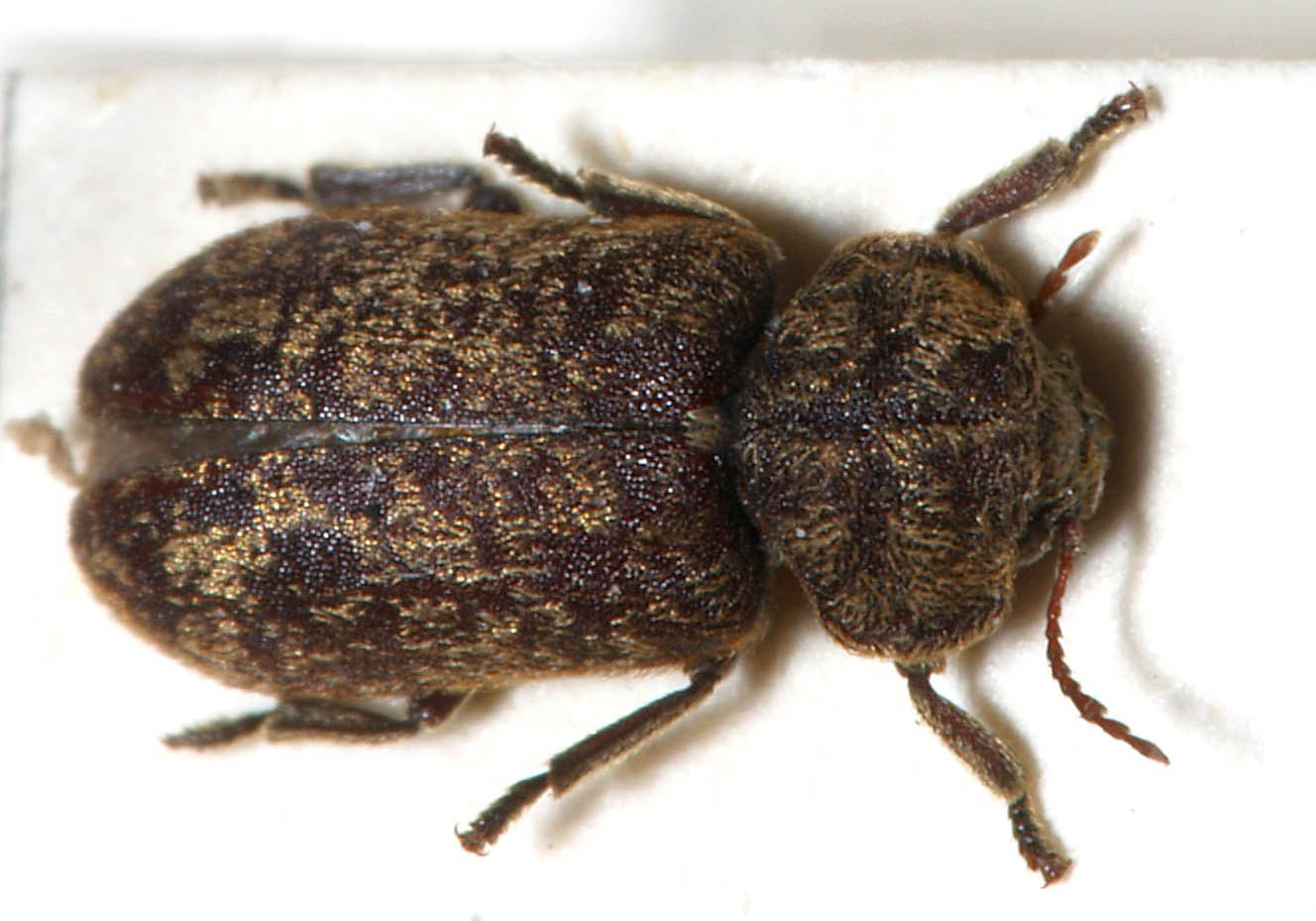 Death Watch Beetle - Xestobium rufovillasum
Habitat: Death Watch Beetles habituate in sapwood and heartwood of partially decayed hardwoods, mostly oak. Frequently found in historic buildings where oak or elm has been used in construction. Softwood may also be affected but only usually if in contact with infested hardwood.

The presence of Death Watch Beetles is usually indicative that timbers have been exposed, past or present, to moisture for a prolonged period. Development and continuance of infestation is also found in drier timbers but usually at a much slower rate. Death Watch Beetle infestation is often found in timbers bearing in or adjacent to damp masonry including built in timbers such as lintels and bonding timbers. Bearing ends of trusses and beams can be severely affected with extensive decay and infestation being concealed by surrounding masonry. 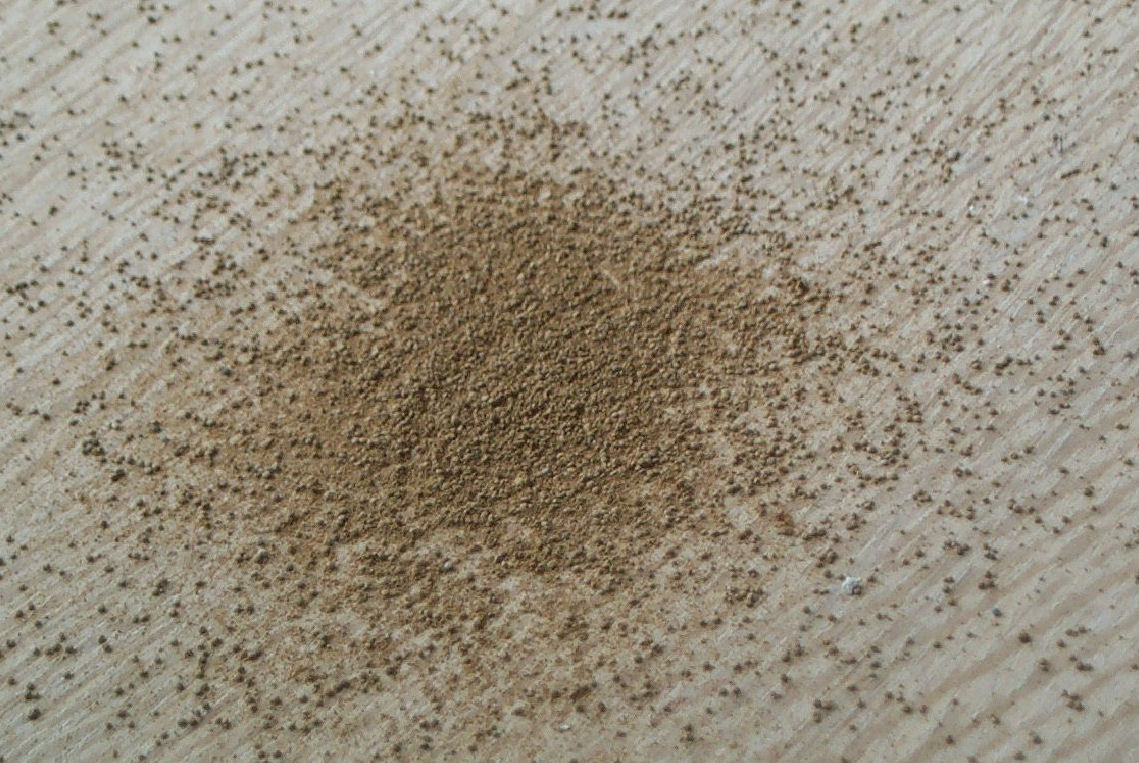 It is essential that a full inspection is carried out by a qualified timber infestation Surveyor to identify the type and extent of any Wood Boring Beetle infestation. If the infestation is active and remedial treatment is deemed necessary, our Surveyors can prepare a full specification of remedial work including for any necessary exposure or Timber Repairs that may be required. Using modern treatment techniques and timber engineering skills we are able to provide a comprehensive treatment and repair strategy with minimum disruption, particularly in historic properties suffering from Death Watch Beetle infestations.

If you have any queries or wish to book a survey, please contact us today.

Can’t find it? Search below

You can get in touch by telephone or email to see how we can help and to book a survey with your local Area Surveyor calling 0845 601 1980.Alternatively, contact us now below.